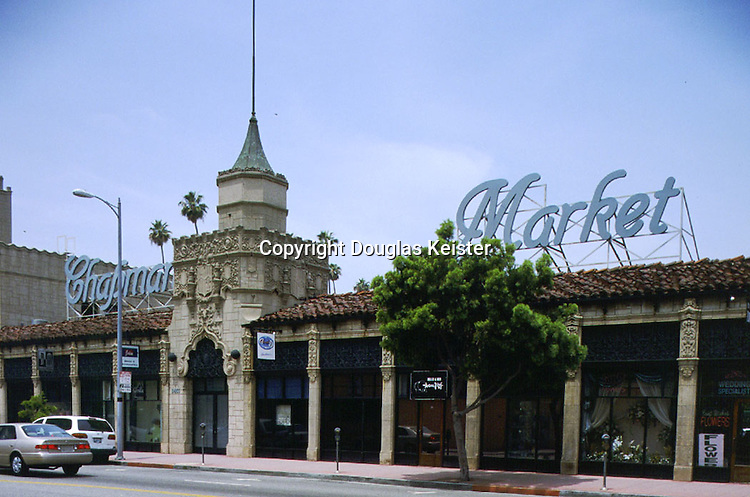 he Los Angeles architectural firm of Morgan, Walls, and Clements designed some of the most elaborate examples of Churrigueresque commercial architecture extant. This building, built in 1929 as part of a complex known as Chapman Park Market, provides a case in point. The upper reaches of the massive tower are writhing with Churrigueresque ornament, while the areas of wall not otherwise embellished are covered in ashlar-patterned terra cotta blocks of varying relief. Like many large firms, Morgan, Walls, and Clements employed numerous detail draftsmen whose job it was to copy ornament from photographs or pattern books and transfer it onto the building plans.

Still, architectural drawings necessarily could give only a rough indication of the architect’s intent; it remained for artisans skilled in the various ornamental crafts to interpret and carry out the work. Hence, sumptuous buildings such as this one stand as a monument to the workmanship of the era’s craftsmen, without whom the demanding details of Revivalist architecture could never have been realized. The exterior decorative arts involving masonry, stucco, cast-stone, terra-cotta, woodcarving, and wrought iron were at their zenith during the 1920s, as were interior finish crafts such as graining and marbling, gold leaf, and stencil-painting. Many of these crafts lay dormant for a half-century before being rediscovered by appreciative artisans in the 1970s.
Douglas Keister