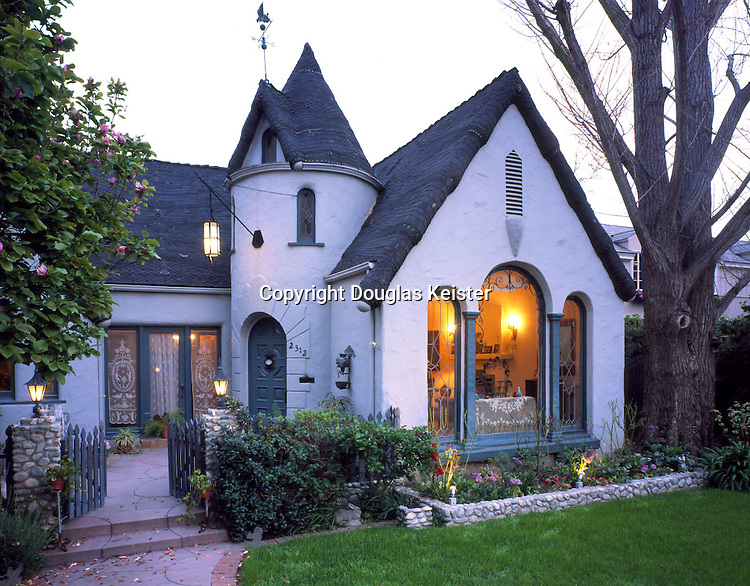 Glendale, California. 1929. The year was 1929, and "The Great White Hope", Jess Willard, was at the peak of his popularity. Willard had won the World Heavyweight Boxing title in 1914, beating the black Heavyweight Champion Jack Johnson after only 26 rounds in humid Havana, Cuba. It had been a little difficult to stage the fight, as Johnson was on the run from the Feds for "the importation of women for prostitution", and the fight could not be held in the United States. After Willard beat Johnson, his popularity was assured and the "The Great White Hope" became a subject of movies and books. The phrase reflected the popular sentiment of the time, that is the search to find a white champion to upset Johnson, the black and unpopular but reigning, world heavyweight champion.
Willard had the French Chateau style cottage built with just one story, but with all of the latest designs, from Batchelder tiles around the fireplace, to leaded, arched glass windows throughout, inlaid, hardwood floors, and colorful, art glass and metal chandeliers and wall sconces.
When the current owners bought the house ten years ago, it had only seen four owners and the original features were still intact. The light fixtures had never been altered, original plumbing fixtures were still in the cobalt blue and mint green tiled baths, and the mahogany trim throughout the house had never been painted. The owners only had to do cosmetic work, except for the roof, which they restored to its original sea wave pattern using however composition shingles due to fire codes. RELEASED
Douglas Keister