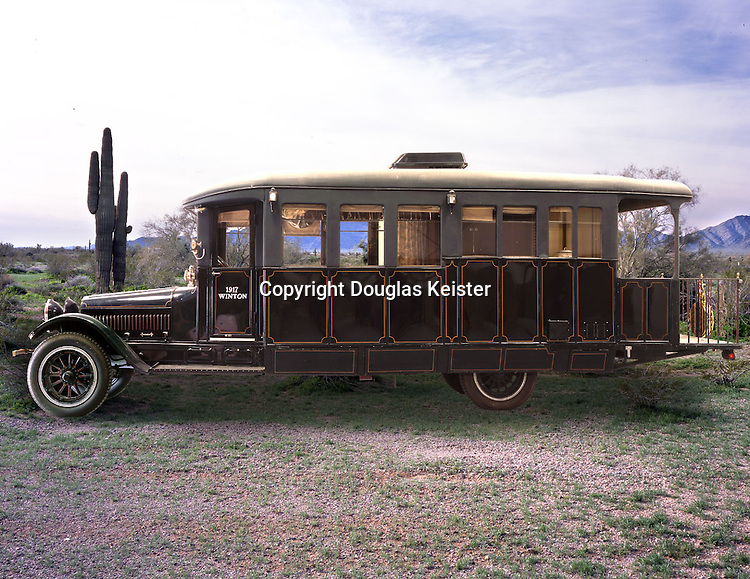 The house car eventually made it into the collection of Metropolitan Opera star James Melton and resided on his Connecticut farm for a number of years. In the late 1950s, Melton had to liquidate much of his collection to pay off debts, and Bill Harrah purchased the Winton for his Harrah’s Automobile Collection in Sparks, Nevada. Unfortunately, after purchasing the vehicle, Harrah found out that Melton had used the Winton as collateral for one of his numerous loans and the house car was sitting at an impound facility in Massachusetts. Harrah may have had the title, but the sheriff had the Winton. So Harrah consulted his lawyer who informed him that because of some obscure state’s rights law, if Harrah could find a way to get the Winton over the state line to Rhode Island, the vehicle would be his. So Harrah instructed one of his employees to wait until the sheriff’s deputy, who was guarding the car, left the facility. Then he told the employee to fire up the engine and drive the ten miles to Rhode Island. The employee seized an opportunity when the deputy went off on an errand, but because the Winton’s fuel pump was malfunctioning, the employee had to hand pump the gasoline. The wheezing Winton barely made it to Rhode Island.

Automobile collector Buck Kamphausen acquired the vehicle when over twelve hundred of Harrah’s vehicles were auctioned off after Harrah’s death in 1978.

NEW INFORMATION RECEIVED BY A READER IN OCTOBER 2014: "The original owner was Dr. Fithian of Grove City PA. He used it to campaign for the Prohibition Party. I read on another site that it was used by a southern politician. Not true. My uncle, who has been gone for a number of years, often talked of it and probably worked on it. The early history of the car is well documented in the book, Grove City The Way We Were. "
Douglas Keister