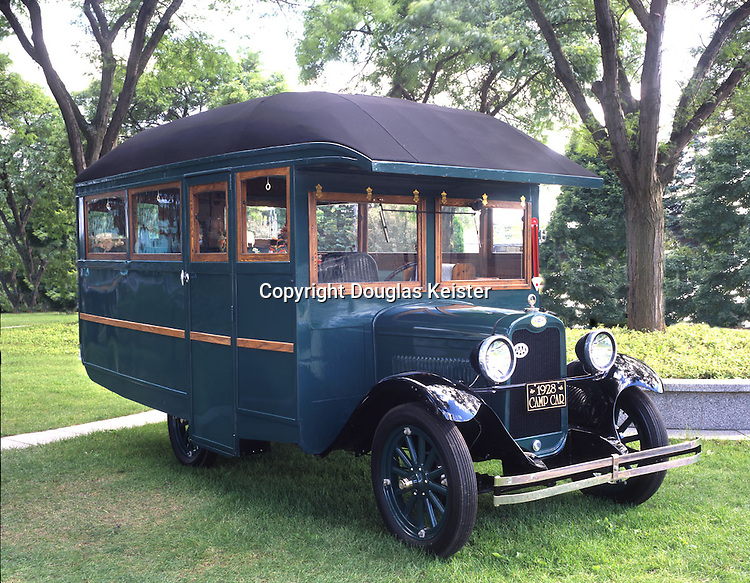 Like most house cars of the era, this 1928 Chevrolet House Car is personalized for the owner. This house car’s evolution began in 1928 when Clarence Stimpson, an engineer residing in Michigan City, Michigan, purchased a 1928 Chevrolet chassis. Stimpson drew up plans for the interior and exterior woodwork and delivered his drawings and the chassis to the Zagelmeyer Auto Camp Company in Bay City, Michigan.

Zagelmeyer manufactured fold-up camping trailers under the Zagelmeyer De Luxe Auto Camp Trailer name as well as their specialty, the Zagelmeyer Kamper Kar, which was mounted on a Ford coupe or roadster chassis. Zagelmeyer also advertised that they could build custom camp cars for mounting to other types of vehicles, such as a Chevrolet or Reo Speed Wagon. The house car body for the Reo Speed Wagon was 15 feet, 6 inches long with a mahogany interior, plush upholstery, a wardrobe, drop-down beds, a desk/table, and even a sink with running water.

Clarence Stimpson’s house car was modeled after the 11 foot, 5 inch Gypsy Cruiser’s body featured in Zagelmeyer’s 1928 catalog. In August 1928, Stimpson, his seventy-nine-year-old father, and another friend took off for California in their new house car Stimpson dubbed the Gypsy, since it was similar to Zagelmeyer’s Gypsy model. Their journey to California took them along the Old Spanish Trail, then to Globe, Arizona, and onward to California via the Apache Trail. The reports they mailed home told of a delightful trip and the comforts provided by their house car. They even commented that there were “no bad roads,” which is testament that all things are relative to one’s expectations. After wintering in California, the trio returned to Michigan the following spring.

The house car was stored in Mackinaw City for a time, and then moved to a specially built barn in Roger City where it resided until 1996 when it was acquired by John McMullen of Lapeer, Michigan. McMullen and two friends, Walt Davenport and Gary
Douglas Keister