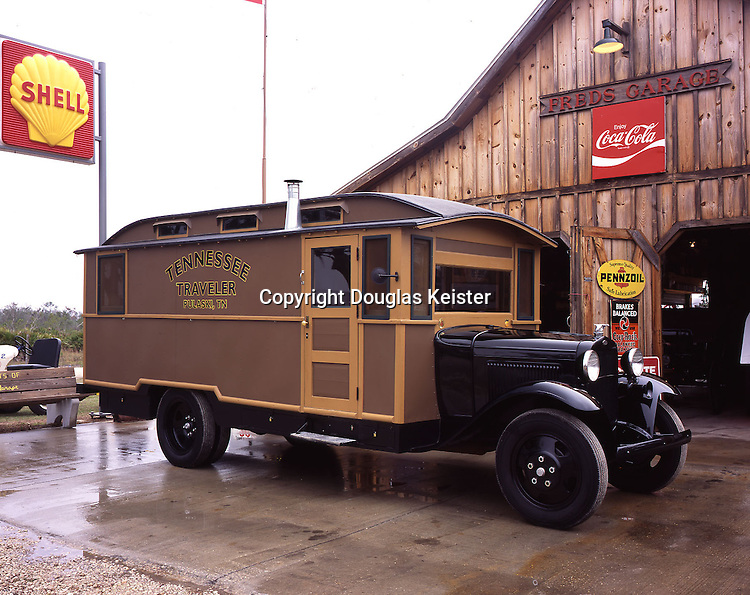 The 1920s and early ’30s were the heyday of the house car. The Tin Can Tourists, which was established in 1919, had well-attended “conventions” that were jam-packed with house cars and vehicles of all types. Celebrities like Edison, Ford, Burroughs, and Firestone further popularized motor camping and house cars during their well-publicized Vagabonding expeditions. The romance of the road and the much touted health benefits of the great outdoors lured many Americans to build or purchase one of these tidy homes on wheels. Unfortunately, because of their homemade construction and the maintenance required to keep their engines and drive trains functioning, few house cars have survived.

Bob White knew he had discovered a unique piece of American history when he found this remarkable 1931 Ford AA house car in a barn in Athens, Alabama, where it had been stored for forty years. The roof of the barn had collapsed and bushes and vines, which had grown up around it, had essentially hidden the house car from view. But when it was finally extracted from its mooring place, despite being well weathered, everything was intact, including the engine and interior furnishings. In fact, after cleaning the sparkplugs and adding a bit of lubricant, the engine fired right up.

The bulk of the restoration was executed by Dennis Edwards, who started by doing a basic clean up of the vehicle to assess the general condition. By carefully scraping away the top layer of faded and oxidized paint, Edwards was able to reveal and then copy the original colors. The Tennessee Traveler name is not original but was applied by the current owners, Bob and Anne White, to reflect their home in Pulaski, Tennessee. The naming of a house car is sympathetic to the style during in the 1920s and ’30s when people often paid homage to their vehicles, lifestyle, and home states with fanciful signage, such as Gypsy, Dunwerkin, Nutshell, Suits Us, Happy Hoosiers, and My Old Kentucky Home. This practice was
Douglas Keister