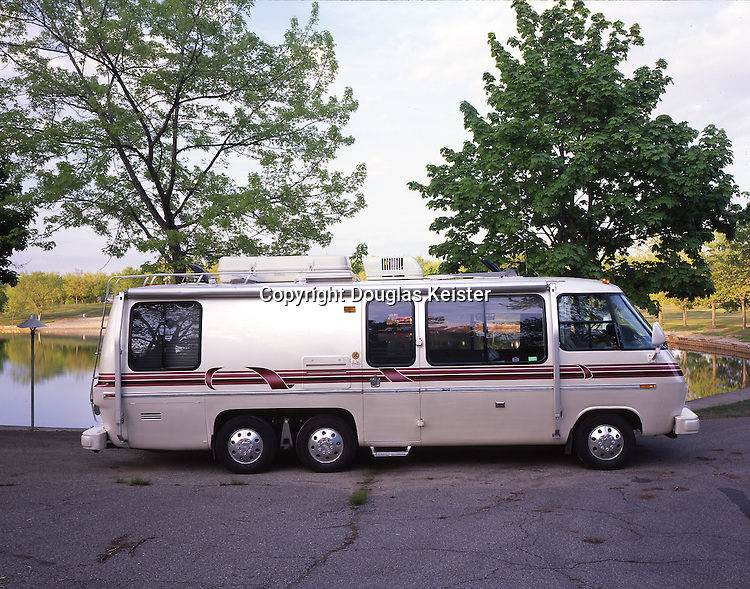 GMC is the only major automotive manufacturer to produce its own motorhome from the ground up. For years, motorhome manufacturers had been plopping their creations on GMC’s truck chassis, but by the early 1970s GMC decided it was time to manufacture their own custom-designed units. Initial design work on the GMC motorhome began in 1970 with an anticipated release date of 1973. The chief element of their creation was a front-wheel-drive design based on the successful Oldsmobile Toronado automobile, which incorporated a 455-cubic-inch gasoline engine coupled with a Turbo-Hydramatic 425 transmission with torsion-bar suspension. The rear suspension utilized dual swing arms (one leading and one trailing) with a single air spring on each side. The combination of the front wheel drive, which eliminated a bulky drive train to the rear, and the suspension elements allowed for a low-slung vehicle with car-like handling and ride. A ladder chassis topped with an aluminum frame sheathed with aluminum and molded fiberglass body panels resulted in a ground-hugging vehicle that avoided the stability and handling problems of other top-heavy motorhomes. The molded fiberglass also allowed for a more streamlined design, a breath of fresh air during a time when motorhomes were becoming boxier every year.

The GMC motorhome debuted in May 1972 at the Transpro ’72 trade show in Washington, D.C. A few months later, 1973-model-year vehicles rolled off the assembly line to general acclaim from the recreational vehicle community. Two models were offered, Model 230 (23 feet) and Model 260 (26 feet). The coaches were available in a motorhome configuration with a GM-finished interior and a Transmode configuration, which was a bare coach sold to other RV manufacturers, such as Avion and Coachman that provided their own interior. Like all motorhome manufacturers, GMC was hit hard by the 1973 energy crisis, but it was a large enough company with sufficient resources to weather the storm. Eventu
Douglas Keister