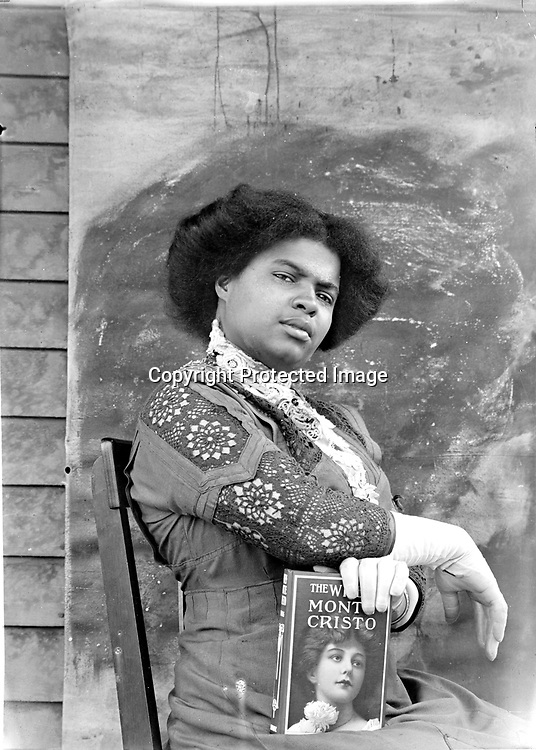 MAMIE GRIFFIIN, 1914
Mamie Griffin worked as a cook. In 1914 she resided at 915 U Street in Lincoln with her husband Edward (1883-1939), a waiter at Lincoln Hotel. Their little house and other humble residences stood on a dirt street among railroad tracks and industrial uses north of downtown Lincoln. Far from humble are the dress and demeanor of this woman, posing confidently with her romance novel, The Wife of Monte Cristo. The book was a sequel (by a different author) to the immensely popular Count of Monte Cristo by Alexandre Dumas. On close inspection Mamie's hairstyle matches the one of the woman on the cover. It is quite possible that Griffin's dress, pose and hairstyle is visually intended to say, "I'm just as good as the woman on the book cover." That ethos was a basic tenant of the New Negro Movement.

ADDITIONAL INFORMATION SUBMITTED BY DELEON TODD 2/22/2017: Mamie L. Griffin (wife of Edward J. Griffin) was born in 1895. According to the 1913 Lincoln City Directory, she & husband lived @ 642 N. 9th St. The 1930 U.S. Census lists Mamie as "Mayme" & the couple's address was then 2225 S. St. (Ward 8). They owned their own home. Edward (1883-1939) was a cook & railway porter. Mamie/Mayme was a homemaker. I found Mr. Griffin's grave location @ Findagrave.com. I can only assume Mamie was buried at the same location, but I haven't been able to thus far find any data confirming her death date or burial location.