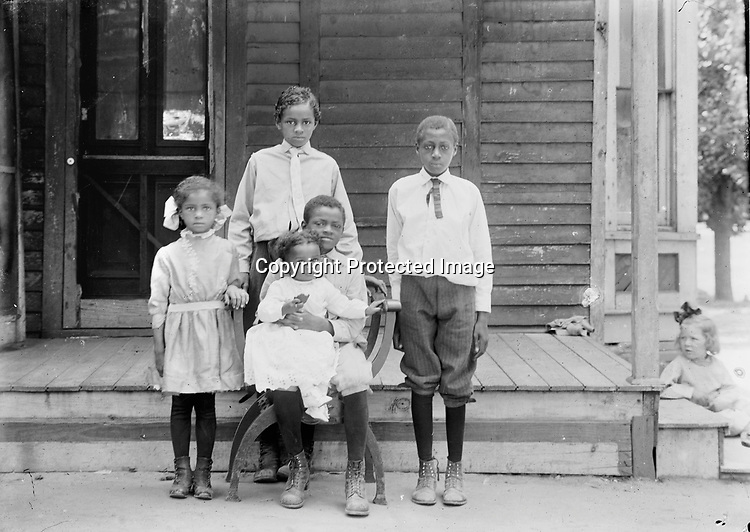 Cora and Alonzo (Lon) Thomas operated a small grocery from the front room of this house at 715 C Street. Four of their five children are portrayed here. Baby Lonnie, born in 1909, sits on Herschel's lap. Agnes stands at left, and eldest son Wendell stands at the center. The young man at right is probably Lucius Knight, their mother's half brother. Wendell worked a typical variety of jobs in Lincoln--waiter, clerk, porter, laborer, and janitor--before founding the Thomas Funeral Home in Omaha. The Thomas family and many other African American families lived in the South Bottoms, a neighborhood mainly of Germans from Russia, Lincoln's largest immigrant group. The little blonde girl who leans into the right edge of this view serves as a reminder that Lincoln's residential neighborhoods were not segregated by race in the early 20th century--poor people of many ethnicities lived together. A few years later and through the middle third of that century, residential segregation became prevalent in Lincoln. A close-knit black neighborhood arose from that adversity, centered around Twenty-first and T Streets.

INFORMATION SUBMITTED BY STAN SCHMUNK 2/22/2017 The little girl is Marie Busche, daughter of German immigrant Fred Busche. She's 3 years old in this photo. By 1930 she and her father are alone in the house at 703 C. Volga Germans later bought it and were living there when I was growing up. But now one of my high school classmates lives there with his wife!!

More by Stan 8/1/2017: This house was built in 1886-1887 and stayed in the black community through the 1970s. It waas built for a veteran of the Civil War who became a coal miner in Virginia. He was disabled to some degree. He and his family only stayed in Lincoln for a short time before moving to Denver, possibly for his health. He passed away in the early 90s and his wife then took her brood to Los Angeles. She later passed and is buried in the old cemetery just north of the 10 in Los Angeles.
Douglas Keister