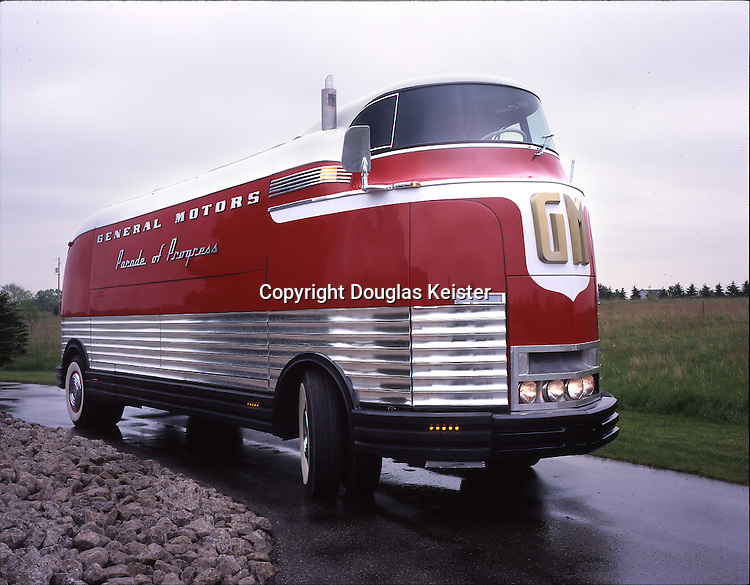 This 1940 Futurliner is a tribute to the popularity of streamlining in the 1930s and the dedication of the people who participated in its restoration. The genesis of the Futurliner lies with one Charles F. Kettering, a General Motors research vice president who was responsible for a number of technological breakthroughs, such as the commercial electric self-starter, ethyl gasoline, and the diesel-electric locomotive. Inspiration struck when Charles, also known as Boss Ket, attended the 1933 Chicago World’s Fair. Admiring the GM exhibits, he wondered if there was a way to enhance the impact and visibility of those exhibits by taking them on the road in some sort of public display. He took his idea directly to the president of GM, Alfred P. Sloan Jr., who gave him approval to build his proposed traveling exhibits.

What resulted was the Parade of Progress, a traveling exhibition housed in eighteen vehicles and looked over by a staff of forty to fifty people. The stars of the show were eight enormous streamlined vans, each mounted on a 223-inch truck chassis. The finished vehicles were 33 feet long; 8 feet wide; and 11 feet, 7 inches tall. The driver sat high atop the vehicle in a cockpit-like chamber. The driver’s head was a full ten feet above the roadway, which, according to reports, resulted in an unnerving experience for the driver while going beneath underpasses. The vehicles and their exhibits were extremely successful, so much so that in 1940 the original eight Streamliners were replaced by updated versions dubbed Futurliners. By the time the updated Parade of Progress hit the road in 1941, the dark clouds of war were looming. After the Pearl Harbor attack, the traveling exhibition was moved to a warehouse in Ohio where it remained until 1953.

In 1953, the Parade of Progress was revamped and new space-age exhibits were added on subjects like jet propulsion, the atom, the atmosphere, and stereo. But the public’s growing fascination with the relatively ne
Douglas Keister