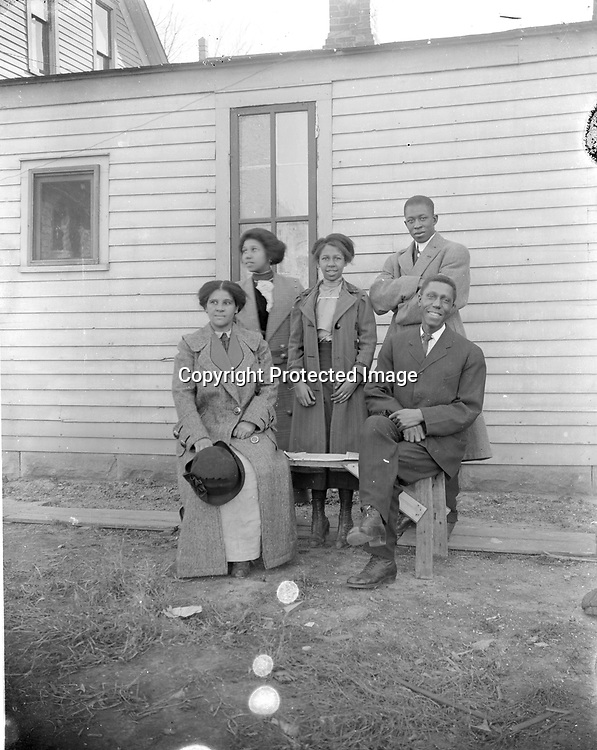 COLLEY AND MALONE FAMILIES. Walter R. Colley (1871-1970) is pictured at right, with his son-in-law Clyde Malone (1890-1951) standing behind him. Colley's wife Lula (1875-1958) shared the bench with her husband; between them stood their daughter Izetta (1892-1966). Clyde was 20 and Izetta 18 when they married in 1910, around the time this photograph was taken. As Clyde Malone wrote in 1946, "After graduation from high school, I was fatally bitten by the matrimonial bug and deluded Miss Izetta Colley, of the Missouri Colleys, into saying 'I do', (and she has for lo' these many years)." Their marriage lasted over 40 years until Clyde's death in 1951.

Clyde Malone, standing at right, was born in Lincoln to Frank and Pency Malone. His father was a plasterer. Beside him is his wife, Izetta, whose parents, Lulu and Walter Colley, moved their family from Lexington, Missouri, to Lincoln in 1905. Father and son-in-law held service jobs typical of those available to black men in Lincoln in the first two decades of the 20th century--porter, janitor, waiter--before partnering to operate a grocery store in 1920-1921.

Clyde then attended the University of Nebraska and graduated in 1925. Clyde and Izetta left Lincoln for about a decade while he worked as a district manager for an insurance company and then at a community center in Minneapolis, before returning to work at Lincoln's Urban League. He became executive director in 1943 and served until his sudden death in 1951. The Urban League was renamed Clyde Malone Community Center in his memory. Izetta was director of music at Quinn Chapel and played organ and sang at Lincoln's other black churches