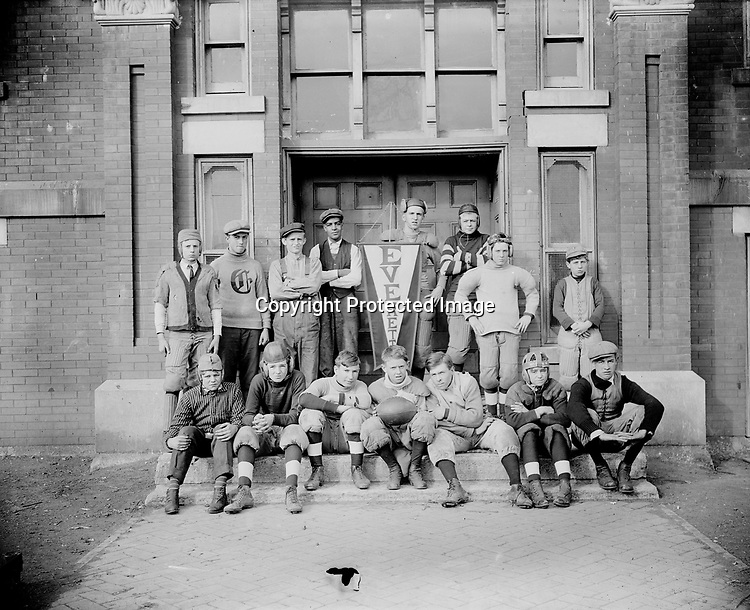 FOOTBALL TEAM AT EVERETT ELEMENTARY SCHOOL. Everett Elementary School was built in 1887 at Eleventh and C Streets. Harrison Johnson built his house two blocks away in 1891 and presumably his son, John, attended school here. The football team John Johnson photographed at the schoolhouse door proudly displays its Everett pennant. Although mixed in age, size, race, and equipment, another damaged negative shows the group lined up in football formation. One youth's striped-sleeve jersey resembles the uniform of the University of Nebraska team in that era. The African American man standing to the left of the pennant may be Pendleton Murray, who graduated from Lincoln High School in 1917 and worked as a carpet cleaner and later as a turnkey at the county jail. Everett Junior High School replaced this school in 1928, then was converted back into an elementary facility in 1990.

Added by Stan Schmunk 6/2/2018: Pendleton's brother, whose name escapes me, was an even better athlete. He may be the one in one or both of these photos. Their father first appeared in Lincoln as midwife Hannah Rosier's assistant. He later owned a carpet laying business. The large family lived on the Southwest corner of 7th & C. It's still there. I saw it nearly every day when I was growing up at 720 C.