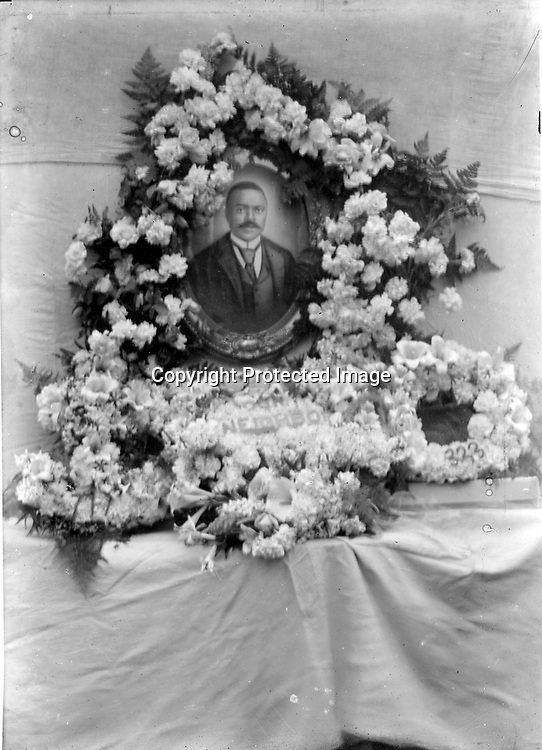 Memorial wreath/bouquet of a member of the International 777 Order of Twelve 333 of Knights and Daughters of Tabor. The Lincoln, NE chapter was called the Ricketts Commandery No. 14. Comparing the portrait with other photos in the collection, this may be Henry Burden (1842-1913).
The genesis of the Knights of Tabor was an African American secret society named The Knights of Liberty and also the Knights of Tabor and the International Order of Twelve that was formed in 1846 by Moses Dickson. The main purpose of the group, which was formed by 12 men in St. Louis, was to organize a slave rebellion. In his writings, Dickson claimed the secret organization had 46,000 members. When it was clear the Civil War would happen, Dickson changed the focus to assisting in the Underground Railroad (their literature states they helped 70,000 slaves escape) and later to a benevolent society with men's and women's groups. Unlike most benevolent societies where the women were subservient to the men, the Knights and Daughters of Tabor were equals.
So what do the 777 and 333 signify regarding the Knights of Tabor? The 777 is known as a perfect number associated with creation, the number of letters in Jehovah and was used (when printed on a card) to summon a Knight of Tabor. 333 is associated with the Trinity, is part of the initiation rites in Druidism (Earth, Water and Air) and is used in a number of the Degrees of the Knights and Daughters of Tabor: "We use the 333 in the Daughter of the Tabernacle degrees as the hailing figures of danger and distress. You are instructed, when you hear the hail 333, to not pause or stop until you find the person who gives that hail: you are obligated to save him at the risk of your own life, and to relieve him if in distress. Remember the 333."
Moses Dickson is largely unknown today, but his place in African American history is significant.
Douglas Keister