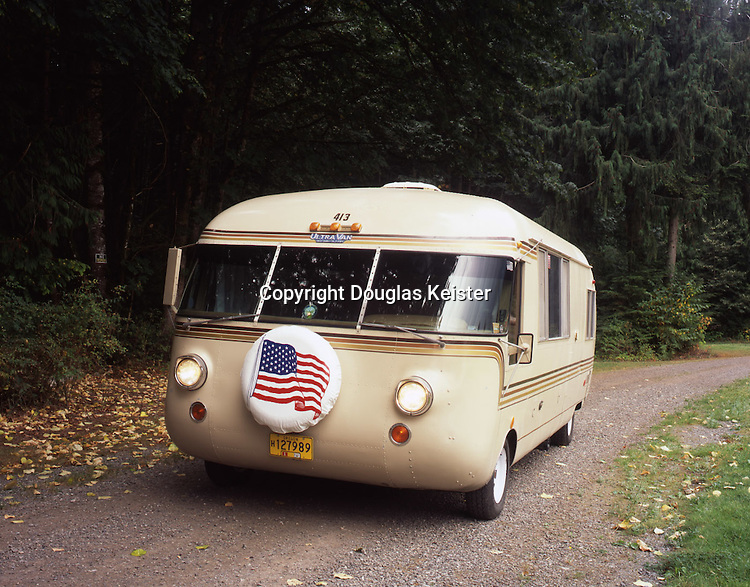 The history of the Ultra Van can be traced to California RVer Dave Peterson. Peterson, who worked as an aircraft designer at Boeing and Beech. He had a Spartan trailer and also a boat. When he went on outdoor adventures, he had to choose between the comfort of the living space of the trailer and the recreational aspect of the boat, a dilemma that caused him to ponder ways to build a motorized trailer so he could tug his boat along behind it. The answer came in 1959 when General Motors introduced the 80–horsepower, 140-cubic-inch rear-engine-powered Corvair, an automobile that would later achieve a measure of fame as the subject of Ralph Nader’s 1965 book Unsafe at Any Speed. Employing his aircraft-design knowledge, Peterson used monocoque construction techniques of the aircraft industry to construct a body that needed neither frame nor chassis. The front and rear sections were made of fiberglass while the center section was made of an aluminum skin stretched over aluminum ribs. The low-slung design afforded a pleasing profile, plenty of interior space in its modestly proportioned 22-by-8-by-8-foot body and helped the Ultra Van attain a respectable 15 to 17 miles per gallon. Prior to this, monocoque construction techniques were used in trailers as early as the mid-1930s when sailplane pioneer Hawley Bowlus built his Bowlus-Teller trailers, but the techniques had never been used in any production motor coaches.

After renting a warehouse space in the fall of 1960, Peterson hired students from a local technical school. Four months later, the first unit, christened the Go-Home, poked its nose out the door. In all, Peterson and his students produced about fifteen of the Go-Homes, which sold for around $7,000. In 1963, the Prescolite Corporation, a manufacturer of light fixtures ordered some of the units (now dubbed the Travalon) to be used as mobile showrooms. By 1964, Peterson’s creation had attracted the attention of John Tillotson, a publisher in Kansas. Tillots
Douglas Keister